The National Institutes of Health’s (NIH) Monitoring the Future Study (MTF) is an annual review of teen drug use carried out by the University of Michigan. The survey looks at drug use among approximately 43,000 teens. The study found that nearly one in three 12th-grade students reported using some type of vaping device. 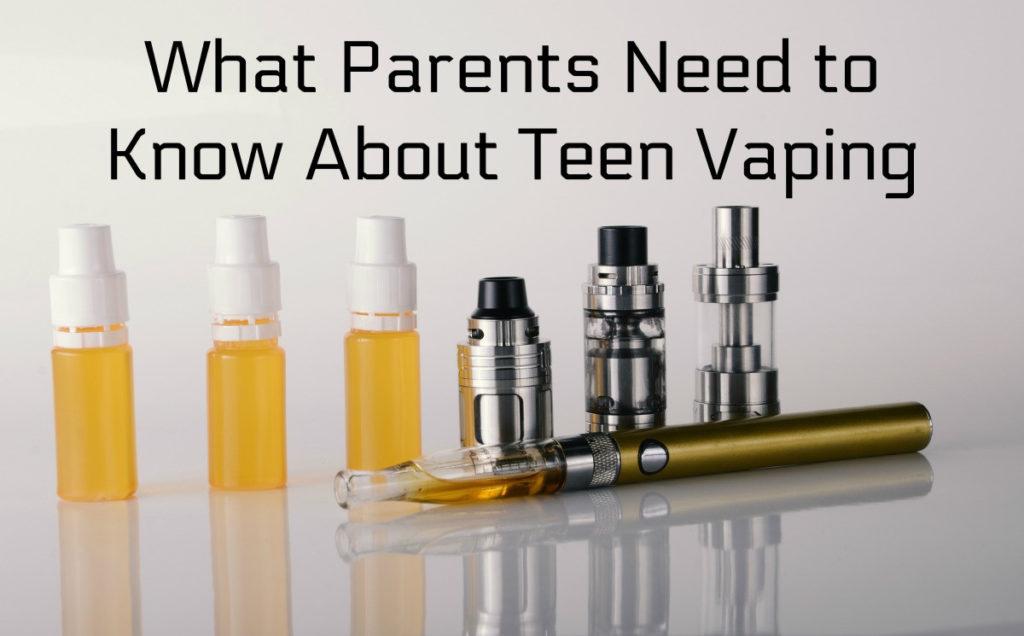 Vaping refers to the act of inhaling and exhaling vapor produced by an aerosol via an electronic cigarette or some other vaping device. The substances that teens are vaping range from liquids containing various flavorings to fluids containing nicotine and THC (the chemical component of marijuana that produces the high).

Vaping is Marketed to Appeal to Teens

Vaping liquids are made with lots of flavors designed to appeal to teens. Vaping devices that teens can charge just like their cell phones are readily available. Marketers know that teens like “cool” jargon. An example is one slang word for vaping, JUULing (pronounced “jeweling”) that refers to the JUUL brand device made to look like a flash drive rather than an e-cigarette.

The Risks of Vaping are Downplayed

Vaping is marketed as a “safer” alternative to traditional cigarettes, and many teens falsely assume that an e-cigarette that doesn’t contain tobacco is safe. However, here are the reasons why vaping is not safe.

No One Knows Exactly What Chemicals are Being Vaped

Vaping is new and there are hundreds of brands, so there’s not much information about exactly what chemicals might be in what vape liquids. Synthetic chemicals in these liquids may include “herbal incense” like spice (also known as K2 or synthetic marijuana). K2 is marketed with names designed to appeal to teens – Black Mamba, Bliss, Bombay Blue, Fake Weed, Genie, Joker, Kush, Kronic, Zohai.

Teen Lungs are Exposed to a Variety of Chemicals

Vaping exposes the lungs to carcinogens in the vaping liquid and also toxic metal nanoparticles from vaping devices. These chemicals can cause irritation to young lungs, “smoker’s cough,” and mouth sores.

Vaping May Cause Transition to Traditional Cigarette Smoking

Reuters Health summed up the results of studies on teen vaping that found the following.

What Can I Do to Prevent my Teen from Vaping?

You need to make it clear to your teen that you don’t want them to engage in vaping. However, you want to have a conversation as opposed to a confrontation. Keep reminding yourself to speak and listen from a place of support, love, and concern. Explain to your teen that teens who vape are at risk for long-lasting effects. They should be made aware that vaping substances affect the development of a teen’s brain reward system, and continued use can eventually lead to health problems and addiction.

You want your teen to be as healthy as possible and so do the teen counselors at Doorways. We will work to find out why vaping is attractive to your teen and help them to replace vaping with healthier behavior. Contact us today for a free consultation.

The Substance Use Disorder IOP (Intensive Outpatient Program) at Doorways is a group therapy program for teens ages 13-17 who are struggling with drug or alcohol abuse.  The program will take place at our teen counseling clinic in Phoenix, Arizona. IOP may be recommended for those who do not … END_OF_DOCUMENT_TOKEN_TO_BE_REPLACED

During this global pandemic, social isolation, and dramatic shifts in our social relationships, both teens and parents are experiencing a lot of anxiety. This month’s workshop will focus on common anxiety disorders, how to identify if there’s a problem beyond what’s “normal” and ways to deal with this in … END_OF_DOCUMENT_TOKEN_TO_BE_REPLACED

Link: https://bit.ly/doorwaysdrugtalk Need a place to talk about drug use? Are you looking for support and ways to have fun without using drugs? We welcome every teen to join us weekly for conversation, education and support regarding drugs of abuse. This is a "no judgment  zone" and a safe … END_OF_DOCUMENT_TOKEN_TO_BE_REPLACED

Our highest priority continues to be the health and well-being of our clients. Starting June 1st clients may choose to attend in person or via remote counseling services/telehealth. We know these are challenging times, but we’ll continue to do our best to serve you.