Doorways provides treatment for OCD and anxiety disorders for teens and young adults in Phoenix, Arizona.

Our specially trained therapists have the experience and skills to help a young person release the grip that OCD and anxiety has on their lives.

We always offer a free consultation to parents and caregivers who have a teen struggling with OCD and anxiety. Call us at 602-997-2880 to schedule an appointment with a caring, confidential, teen counselor. 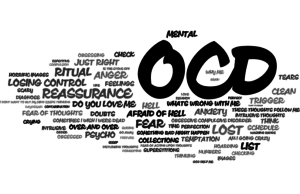 Obsessive Compulsive Disorder (OCD) is a brain disorder that affects a person’s behavior. As the name implies, it involves both obsessions and compulsions. People that are diagnosed with OCD exhibit symptoms of severe anxiety and are often unable to lead healthy, productive lives.

There are two parts to OCD: obsessions and compulsions. While the two are related to each other, they are identified by different symptoms.

An obsession is a thought, impulse, urge, or image that repeats frequently in a person’s mind. Those who are afflicted with obsession believe that these thoughts are outside of their control. In many cases, they don’t want the recurring thought and find that it doesn’t make any sense. The obsession leads to severe anxiety.

It’s often the case that an obsessive thought is accompanied by negative feelings, such as doubt, fear, or disgust. Sometimes, obsessions causes people to think that certain activities must be performed “just right.”

An obsession takes time away from many of the enjoyments and responsibilities of life because it consumes so much attention.

A compulsion is a behavior that a person uses in an attempt to eliminate the obsession. You can think of it as a behavioral response to anxiety.

People who are diagnosed with OCD know that responding to their obsession with a compulsion is only a temporary solution, but they think it’s better than no solution at all. The compulsion effectively becomes their escape hatch, even if they realize that the escape isn’t permanent.

Another way that people with OCD use a compulsion is to avoid getting into a situation that might trigger an obsession. That’s also why OCD consumes an inordinate amount of a person’s time.

The key difference to discerning the difference between a well-disciplined person with good habits and someone afflicted with OCD is the desire and the time required to complete the compulsive behaviors. Those who have OCD would rather not perform the compulsion, whereas the healthy person who performs repetitive tasks as a matter of habit enjoys the routine and it doesn’t occupy multiple hours a day or keep them from doing things they want or need to do. That’s a key distinction when diagnosing someone with OCD.

Although OCD manifests itself in various ways from person to person, there are some common symptoms that characterize people who have it. Here are some examples.

The compulsions will also vary from case to case. These are some common examples:

Treatment for OCD at Doorways

There was a time when OCD was considered very difficult to treat. However, thanks to recent advances in the field of Cognitive-Behavioral Therapy (CBT), the disorder is considered to be very treatable. At Doorways we provide a variety of programs to help treat OCD including individual counseling and OCD IOP programs.

Our OCD IOP Programs are group programs that employ a variety of therapies to assist a young person in managing their OCD including:

OCD is a devastating mental health disorder. People who have OCD suffer from recurring, unwanted thoughts that lead to severe anxiety. They attempt to cope with their obsession by engaging in some type of unnecessary, often bizarre, repetitive behavior. OCD affects people in such a way that it takes time away from the finer things in life as well as certain responsibilities. Fortunately, there is treatment available to those who realize that it’s a problem and are willing to do something about it.

At Doorways, we treat adolescents and young adults for OCD. We have a variety of different programs and methods for treating OCD including our Intensive Outpatient Programs for OCD, as well as individual programs.

If you know of a young person who may have OCD and needs help, call us at 602-997-2880 for a complimentary consultation.

The Substance Use Disorder IOP (Intensive Outpatient Program) at Doorways is a group therapy program for teens ages 13-17 who are struggling with drug or alcohol abuse.  The program will take place at our teen counseling clinic in Phoenix, Arizona. IOP may be recommended for those who do not … END_OF_DOCUMENT_TOKEN_TO_BE_REPLACED

Available virtually or in-person at Doorways (limit of 10 in-person to ensure social distancing, please RSVP). Presentation led by Aviya Bensky, LAC. Aviya is the Clinical Lead forone of our DBT Skills IOPs and has experience with family issues, trauma, and adolescents who deal with life through … END_OF_DOCUMENT_TOKEN_TO_BE_REPLACED

This program is designed specifically for adolescents who are struggling with: -Depression/Anxiety-Self-Harm/Suicidal Idealization-Poor emotion regulation-Difficulty establishing/maintaining healthy relationships-Substance use *This Group will be in person only* … END_OF_DOCUMENT_TOKEN_TO_BE_REPLACED

Need a place to talk about drug use? Are you looking for support and ways to have fun without using drugs? We welcome every teen to join us weekly for conversation, education and support regarding drugs of abuse. This is a "no judgment  zone" and a safe environment geared towards real talk with real … END_OF_DOCUMENT_TOKEN_TO_BE_REPLACED

Check out our calendar of events to see what group programs or special events are going on at Doorways.   … END_OF_DOCUMENT_TOKEN_TO_BE_REPLACED