For the past eighteen years or so, the first day of March has been dedicated as Self-Injury Awareness Day (SIAD). SIAD is an international event that aims to raise awareness about self-injury. Raising awareness means reaching out to people who practice self-injury and educating people who do not. Self-injury may also be called self-harm, self-mutilation, or self-abuse. All these terms are applied to behaviors where someone intentionally and repeatedly harms themselves in a manner that is impulsive but not intended to be lethal, hence the term nonsuicidal self-injury (NSSI). 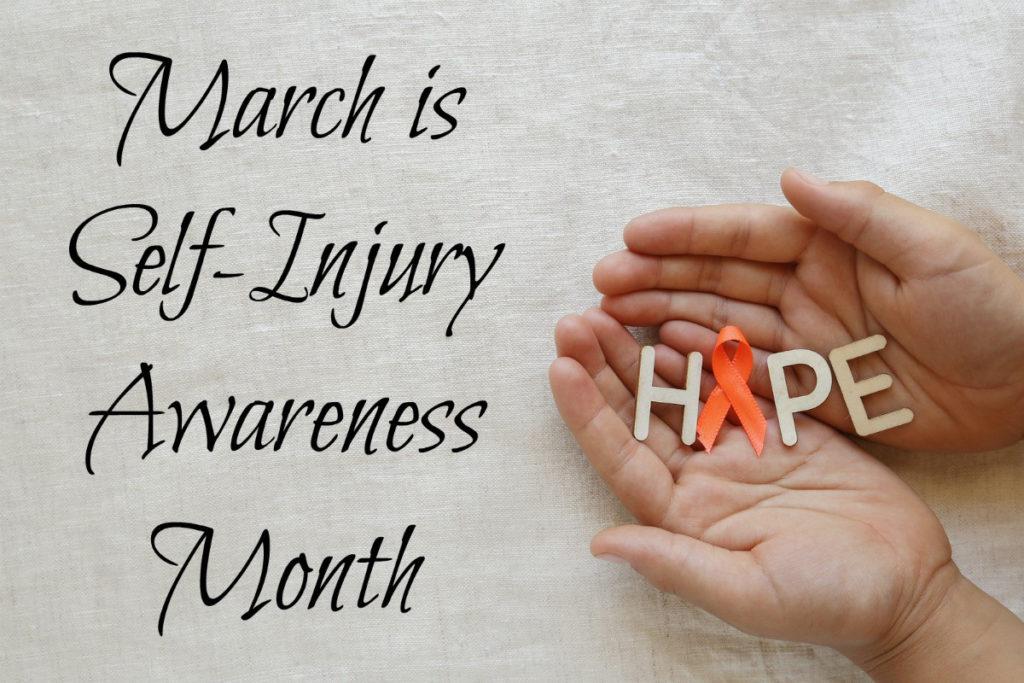 What Forms Does Self-Injury Take?

There is a variety of ways to inflict self-injury. The most common methods are skin cutting (70‑90%), head hitting or banging (21-44%), and burning (15-35%). Less common ways of inflicting self-harm include scratching so that bleeding occurs, punching objects or oneself, breaking bones purposefully, inserting an object into a body opening, and drinking a harmful liquid such as bleach. Most individuals engaging in NSSI hurt themselves in more than one way. For instance, many “cutters” also suffer from an eating disorder.

How Common is Self-Injury Among Adolescents?

Research indicates that self-injuring adults represent about four percent of the adult population in the United States. Rates are much higher among adolescents, with self-injury happening to approximately 15 percent of teens and at a rate of 17-35 percent among college students.

What Causes Teens and Young Adults to Injure Themselves?

People who self-injure report a variety of negative feelings—they may feel one or more of the following: empty inside; lonely; bored; fearful of intimate relationships; unable to resolve interpersonal difficulties; unable to express how they feel; misunderstood by others; under or over stimulated; afraid of responsibilities. Read this National Institutes of Health (NIH) report entitled Nonsuicidal Self-Injury in Adolescents.

Self-abuse is used as an outlet to relieve psychological pain. It may also be regarded as a means of exercising control over one’s body when you have no control over other aspects of your life. Unfortunately, relief is only temporary, and without appropriate treatment, a self-sustaining cycle often develops with urges to self-injure growing in frequency and becoming harder to resist.

While those engaging in non-suicidal self-injury do not mean to commit suicide, they may bring about more harm than they intend and end up with unanticipated medical complications. In severe cases of self-injury, the sufferer may become so desperate about the addictive nature of their behavior and their inability to control it, that they carry out a true suicide attempt.

What are the Warning Signs of Self-Injury?

If you are a parent, the appearance of unexplained or inadequately explained frequent injuries such as cuts, burns, or bruises, should definitely trigger concern. Don’t simply take at face value “I fell” or “The cat scratched me.” Be aware that your adolescent will attempt to conceal these physical signs of self-abuse with clothing, so pay attention if they start wearing inappropriate clothes such as pants or garments with long sleeves in hot weather. The physical symptoms will go hand-in-in hand with one or more of the following: low rate of self-esteem; difficulty handling feelings; avoidance of relationships; relationship problems; poor functioning at home or in school.

What is the Treatment for Self-Injury?

Effective treatment for self-injury sufferers usually takes the form of a case-appropriate mix of cognitive/behavioral therapy, interpersonal therapy, and medication. In difficult to treat cases, other treatment services may be necessary. These could include partial-inpatient therapy of several hours per day or even hospitalization under a specialized self-injury hospital program. Services for accompanying problems such as eating disorders or substance abuse should be integrated into the treatment, depending on individual needs.

Doorways Will Help You

Our professionals at Doorways Arizona specialize in helping anyone in the age group 13-25 who is self-injuring. If you are the parent of a teen or young adult that needs help with self-mutilation problems, don’t hesitate to make an appointment with us. Delaying will only prolong the problem and make things worse.

The Substance Use Disorder IOP (Intensive Outpatient Program) at Doorways is a group therapy program for teens ages 13-17 who are struggling with drug or alcohol abuse.  The program will take place at our teen counseling clinic in Phoenix, Arizona. IOP may be recommended for those who do not … END_OF_DOCUMENT_TOKEN_TO_BE_REPLACED