How social media impacts teens’ sense of self, body image, and behaviors. Learn how you can build protective measures and understand the impact on mental health.

In today’s hi-tech world, many teens feel they should be available 24/7 on social media. It’s a social media environment for teens that far exceeds that of their parents. For many teens, social media is like candy. Researchers at UCLA found that certain circuits in teen brains that are activated by eating chocolate are similarly activated by large numbers of “likes” on social media networks. This causes teens to want to use social media more. Here are some social media teen facts from a report by Common Sense Media:

The good side of social networking plays a vital role in broadening teens’ social connections and helping them learn valuable technical skills. However, there is a downside – teens are becoming addicted to social media. And, the more time they spend on line, the more difficult it becomes for them to self-regulate their social media usage. A number of mental health issues can develop if teens spend too much time online. The following is a discussion of the most common ones.

A teen may have many “friends” online but may be using social media instead of interacting with friends in the real world. This behavior can lead to loneliness, depression and low self-esteem. Physical friendships and dating relationships can suffer when social media takes over a teen’s life, and a teen can end up with no relationships that are deep or authentic. Teens hooked on social media will often download photographs to show others how much fun they are having instead of spending time participating in fun activities.

Teens can feel pressured to respond quickly online with well-written posts and perfect photos. In fact, some research shows that the larger a teen’s online social circle the more anxiety they feel about trying to keep up. Many teens, especially girls, spend a lot of time worrying what others might think of them because they made a faux pas online. Social media is not the same as face-to-face communication. A teen cannot hear someone’s tone of voice or see a facial expression online. As a result, misunderstandings are likely to occur, especially when someone tries to be funny or sarcastic.

Teens can spend so much time on social media that they don’t get enough sleep. Sleep deprivation can lead to mood changes, overeating, a drop in grades, and a lowering of the immune system. A British study published in the Journal of Youth Studies surveyed 900 teens and found that one-fifth of them almost always wake up during the night and log in to social media.

A teen’s social media friends tend to post mainly about their positive experiences. This can make it appear to a teen reader that other teens are leading more interesting and exciting lives. A teen may come to believe that everyone is happier or better off than they are. Envy may lead to a teen indulging in cyberbullying and mean behavior. Many “mean girls” target others because they are envious of the target’s clothes, boyfriend, successes, etc.

What Can Parents do About Social Media?

Parents need to understand the impact that social media can have on a teen’s developing brain. They must establish some sensible guidelines for social media use. Families who navigate the world of social media together, can help a teen’s online life to become more manageable. Click here for some tips on how to manage your teen’s social media use. And, stay tuned for a forthcoming article on what parents can do.

If You Need Help

At Doorways we understand the issues that may have developed from a teen’s use of social media. If your teen has a problem and you need help coping, make an appointment with one of our counselors. There is no charge to find out how we can help you and your teen.

Teens today love social media. They can use social media to connect with their social group and share their perspective with the world. However, responsible social media use might be furthest from a teen’s mind when that new iPhone hits their hand. As such, parents have a responsibility to discuss the ins and outs of social media with their teenage children. 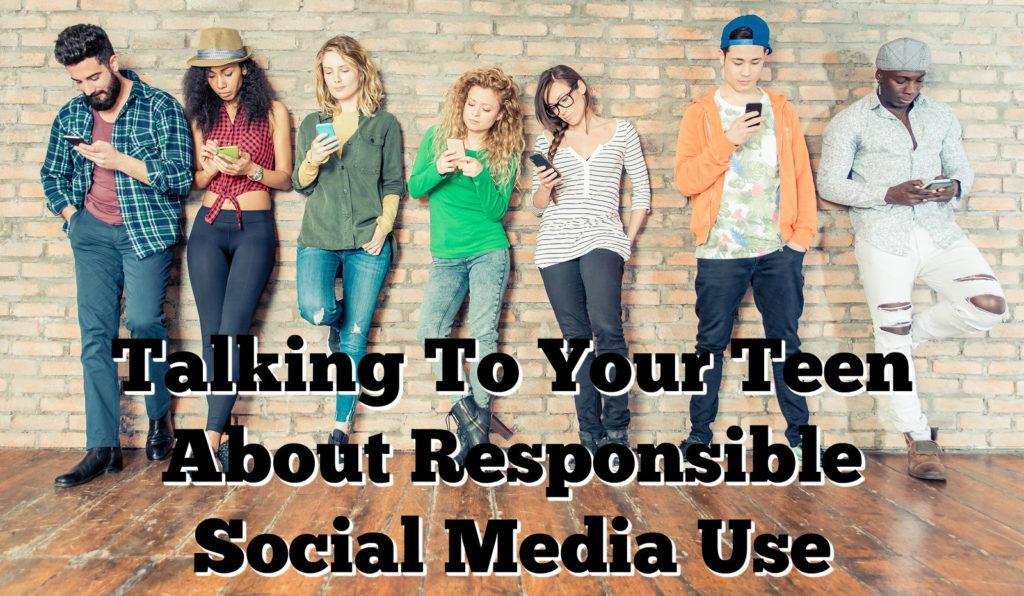 Below, we’ve outlined a few subjects that are worthy of conversation in any home with a teen logging on to a social media account:

Social media accounts come with privacy settings for a reason. You don’t want just anyone to have access to all your information. Although your teen might think it’s harmless to share a password with their BFF, this could pave the way for anything from an innocuous joke to a serious violation of trust. Make sure your teen understands that the only way for their social media accounts to remain secure is to keep them totally private. Let those privacy settings do the job they were created for!

A cyber predator is someone who is looking to take advantage of another person online. Cyber predators utilize social media platforms to create and foster relationships with their victims. Whether they’re looking to obtain financial or personal information, like a PIN or Social Security number, or they are in search of a relationship, talk to your teen about the type of tactics predator’s use online.

Social media is all about instant gratification. They allow teens to share their thoughts as they experience them and connect with others with the click of a mouse. However, this shields teens from the reality that information on the internet tends to stick around…whether we want it to or not. Remind your teen that if they don’t want someone to see or read a certain post, they should think twice about clicking share.

…and Monitored by Many

Along with the permanence of their posts, teens should recognize that many use the internet to gain extra information, and this includes social media. Law enforcement frequently checks the social media accounts of people in their area to gain insight into the who, what, when, and where of illegal or illicit activities. They can cull feeds for photos and descriptions that can help create timelines of events or prove an alibi. Your teen’s school may also monitor accounts to keep track of behavior they deem inappropriate for their students. And it doesn’t stop there. College admission departments might peruse a few posts to learn a bit more about a student before sending off that acceptance letter. While a prospective employer may consider clicking through social media accounts to be a key component of the hiring process.

As a parent, you want to trust your child to responsibly use social media platforms without your guidance. So, take the time to talk to them about the significant issues and dangers of logging on. Help them to understand the ways they can responsibly use their favorite social media accounts.

Doorways LLC is a faith-based counseling organization in Phoenix, AZ focused on adolescents, young adults, and their families. We urge parents everywhere to talk to their teens about responsible social media use. If you or your teen are having trouble talking about this, or any issue, contact Doorways to find out how our services may benefit your family. Our counselors help families learn to communicate in a caring, nonjudgmental environment. 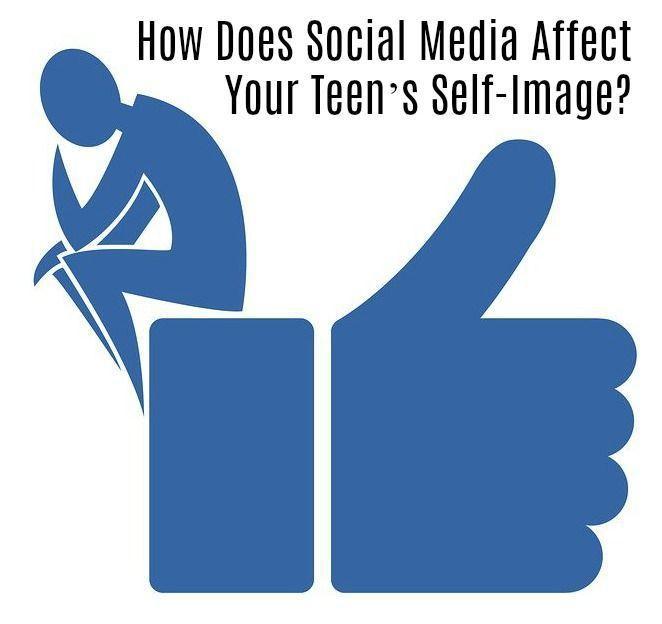 In the years before the internet, a teen’s self-image was influenced primarily by peers at school. Teens and young adults often looked to each other for the current acceptable body image. With today’s technology and particularly social media, many teenagers and young adults are more influenced by the online feedback of their peers than ever.

In past years, teens would see images of models in a magazine or on TV. Now, with the internet, teens can spend endless amounts of time searching online for images of models or celebrities. With social media platforms like Facebook, Instagram, and Snapchat relying heavily on visual images, many teens are now comparing themselves to other teens online and opening themselves up to criticism, sometimes even leading to bullying.

Recently, researchers at Flinders University found that specific social media activities, such as viewing and uploading photos and seeking negative feedback via status updates, were identified as particularly problematic. A small number of studies also addressed underlying processes and found that appearance-based social comparison mediated the relationship between social media use and body image and eating concerns.

If a teen already has body image issues, social media can often exasperate their issues. Something as simple as posting a picture on social media which does not get the positive feedback they were striving for, can lead to further distortion of their self-image and sometimes depression.

So, what can parents do to help their children navigate the criticism on social media?

Help them develop a healthy self-image: Families also play an important part of body image. Be sure to not criticize other people’s looks around your children, including your own.

Share with them your own stories: Remember that awful turtleneck you wore to school and the kids all made fun of you? Let your kids know they are not alone in the awkwardness we all experienced at their age.

Talk about the unrealistic images the media showcases: With today’s photoshop capabilities, most anyone can look “perfect.” Share with your teen the unattainability of most of the images they are seeing.

If you have a teen that struggles with self-image or eating disorders, there is help.  Check out our resource page, or contact one of our confidential, caring teen counselors.  We always offer a free consultation to those who need help.  Just give us a call at 602-997-2880 today.

The Substance Use Disorder IOP (Intensive Outpatient Program) at Doorways is a group therapy program for teens ages 13-17 who are struggling with drug or alcohol abuse.  The program will take place at our teen counseling clinic in Phoenix, Arizona. IOP may be recommended for those who do not … END_OF_DOCUMENT_TOKEN_TO_BE_REPLACED

During this global pandemic, social isolation, and dramatic shifts in our social relationships, both teens and parents are experiencing a lot of anxiety. This month’s workshop will focus on common anxiety disorders, how to identify if there’s a problem beyond what’s “normal” and ways to deal with this in … END_OF_DOCUMENT_TOKEN_TO_BE_REPLACED

September 9th, 2019 from 5:30pm - 6:30pm September's Parenting Workshop will educate parents about Mindfulness. By focusing our attention on the present moment, mindfulness counteracts rumination and worrying...Research has shown that mindfulness helps us reduce anxiety and depression and it enables … END_OF_DOCUMENT_TOKEN_TO_BE_REPLACED

JOIN US AT POINTE HILTON TAPATIO CLIFFS | 7:15 am TEE TIMESupport a resident and our recovery programs by joining us for our annual Golf Tournament. Your contribution will make a significant difference in the life of a person in recovery. For more information: https://thecrossroadsinc.org/ … END_OF_DOCUMENT_TOKEN_TO_BE_REPLACED