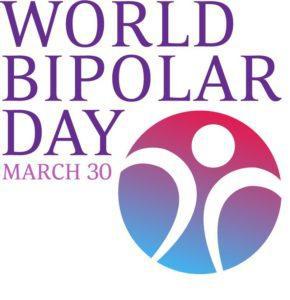 Why was March 30th Chosen for WBD?

The choice of the March 30th date has some interesting history behind it. March 30th was the artist Vincent Van Gogh’s birthday. It is thought that Van Gogh may have been suffering from bipolar disorder. No one knows for sure whether Van Gogh cut off his ear because of bipolar disorder or because of some other reason. This Artnet News article provides some fascinating speculation on this subject.

What is Bipolar Disorder?

Bipolar disorder (or manic-depressive illness) is a mental condition that presents significant challenges to teen sufferers, their family members, communities, and healthcare professionals. The understanding that bipolar disorder is a medical condition is growing, but, unfortunately, stigma relating to bipolar disorder remains a barrier to proper treatment in many parts of the world.

What are the Symptoms of Bipolar Disorder?

Teens with bipolar disorder experience unusually intense emotional swings (known as mood episodes). These mood episodes can be accompanied by extreme changes in sleep patterns and activity levels, and difficulty in carrying out day-to-day tasks. Moods run the gamut between periods of extremely “up” (elated and energized) behavior, called manic episodes, and extremely “down” (sad or hopeless) periods, called depressive episodes.

Bipolar Disorder Symptoms are not Normal

How Common is Bipolar Disorder Among Teens and Adolescents?

Where Can I Find Help for a College Student?

If you have a college-age young adult, you may want to acquaint yourself with this National Institutes of Health (NIH) report on the range of disorders that can affect students. The Substance Abuse and Mental Health Services Administration (SAMHSA) provides a list of organizations that have been set up to assist young adults with a variety of mental disorders.

Researchers believe that bipolar disorder occurs because of a combination of different factors – genetics (bipolar disorder often runs in families), chemical or other changes in the brain, environmental factors, and traumatic experiences.

How is Bipolar Disorder Treated?

Fortunately, bipolar disorder can be effectively managed in several ways. Treatment may include psychotherapy and/or medication. Support from a teen’s family or friends is very beneficial. Good self-care is also important – a healthy diet, exercise, sleep, and abstinence from illicit drugs.

Various kinds of therapy will most likely be advised, alone or in combination with medication. Therapy types include behavioral, cognitive, and dialectical behavioral therapy (DBT). Therapy helps the patient to understand, identify, and choose appropriate behaviors in situations where manic or depressive episodes are likely to be triggered. Lifestyle modifications, such as sticking to a sleep schedule or reducing caffeine/energy drinks, can also support the treatment process.

Place Your Teen Under Professional Care

If you are concerned that your teen may have Bipolar Disorder, it is important to have an evaluation done by a Psychiatric provider. The good news is that the emotions and behaviors connected with Bipolar are symptoms of a treatable disorder. Teens and young adults are resilient and can learn to manage their symptoms, and lead productive and meaningful lives. At Doorways, we are trained to recognize and treat bipolar disorder, so set up an appointment with us today. 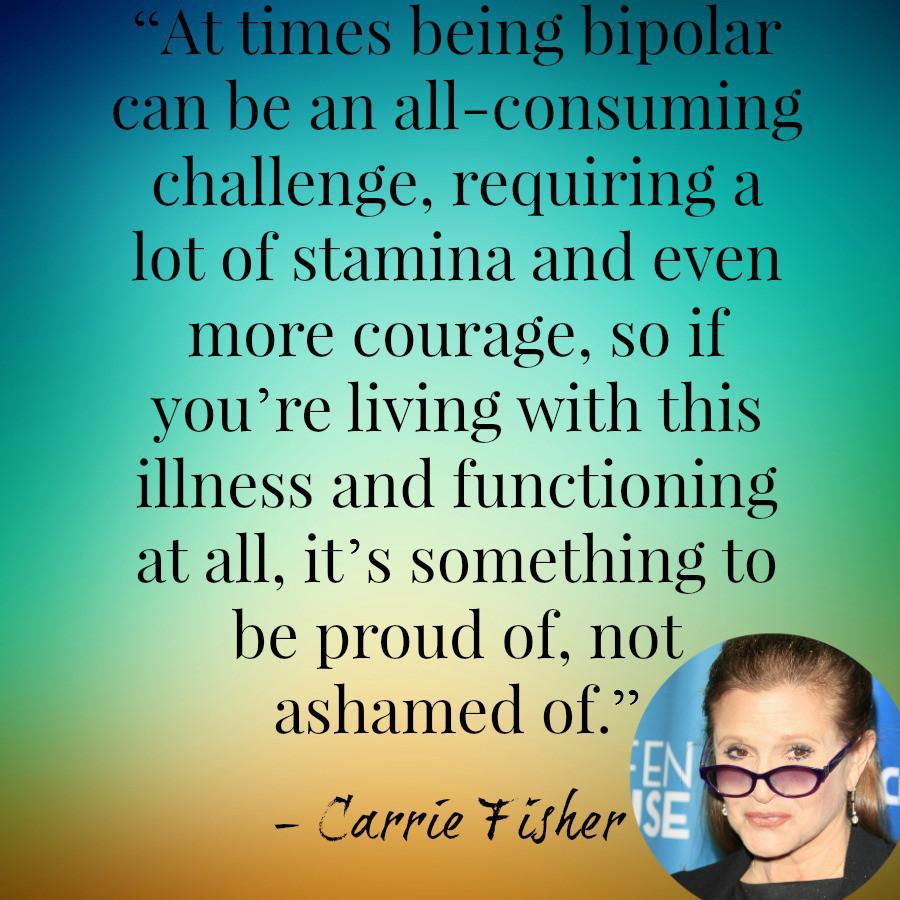 On December 27, 2016, Carrie Fisher passed away. She was best known to the world as Princess Leia from the Star Wars series. That too is how I discovered her when I was about 10 or 11 years old. Oh, how I loved that character. Not your typical princess, she was strong, witty, independent. I wanted to be like her. Years later I find it amusing how I found myself not wanting to be like Leia, but like the woman who played her.

When I was 23 almost 24 years old, after years of serious “mood swings” and a very alarming manic episode, I was diagnosed as bipolar 1. A scary diagnosis. All that I knew of bipolar disorder is what had been portrayed in the media. I had a great support system with my husband, mother, father, sister, psychiatrist, and some friends, yet I still felt very lost. Very alone. I knew no one who was “like me.” No one who really understood what being in my head felt like. So, I began searching.

In my search, I found that the woman who played the princess that I idolized so much as a child was bipolar too. Not only was she bipolar, but she wasn’t ashamed to be bipolar. She owned it. She was proud of it. She was a mental illness advocate and fought to shut down the stigmas that surround it. She had a kind of courage that gave me hope.

Coming out as a person struggling with a mental illness is not an easy thing to do. There is a huge misconception as to what it means to be bipolar, or mentally ill in any of its forms, in part due to how the media portrays it. The stigma that surrounds any mental illness certainly doesn’t help the sufferer feel comfortable seeking help or having open discussions about how it affects their life. Carrie Fisher fought for us. See, I could get up in front of thousands of people and shout the same things she did until I was blue in the face, but no one would take the time to really hear me. After all, they don’t know me. I’m just some random work at home Mom to them. But people “knew” her. They respected her, loved her character, and even loved her in a way. When she spoke, people listened. I am so thankful for the voice that she gave to people like us. Her interviews, her stories, her books, they inspired me. More importantly, they helped give me the courage to fight this thing and to live my life. She helped give me the strength to continue on and not let my diagnosis consume me.

In the days since her passing, I have seen several articles similar to this. People suffering from mental illness, not only bipolar disorder but others as well, expressing their gratitude for what she had done for them. I wonder if she knew how much she meant to us. To us, she wasn’t Princess Leia. She was Carrie Fisher, advocate, stigma fighter, mental illness warrior, and I know we will forever be thankful.

These are some of my favorite quotes from Carrie Fisher about living with a mental illness:

“At times being bipolar can be an all-consuming challenge, requiring a lot of stamina and even more courage, so if you’re living with this illness and functioning at all, it’s something to be proud of, not ashamed of.”

“The only lesson for me, or anybody, is that you have to get help. It’s not a neat illness. It doesn’t go away.”

“Bipolar disorder can be a great teacher. It’s a challenge, but it can set you up to be able to do almost anything else in your life.”

“I don’t want to be caught… ashamed of anything. And because someone who has bipolar doesn’t just have bipolar, they have bipolar, and they have a life and a job and a kid and a hat and parents, so it’s not your overriding identity, it’s just something that you have, but not the only thing – even if it is quite a big thing.”

If you or someone you know is suffering from a mental illness, or maybe just need some extra guidance, please know there is no shame in seeking help. With the right support and treatment, we can live fulfilling lives. Stay strong, stay brave, you got this. 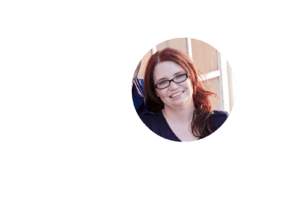 Katherine Cook is a work at home Mother of three amazing boys. She enjoys her work blogging for various types of businesses. Katherine was diagnosed as bipolar 1 around nine years ago and has recently started sharing her journey and struggles with others in hopes of helping to end the stigma surrounding mental illness. 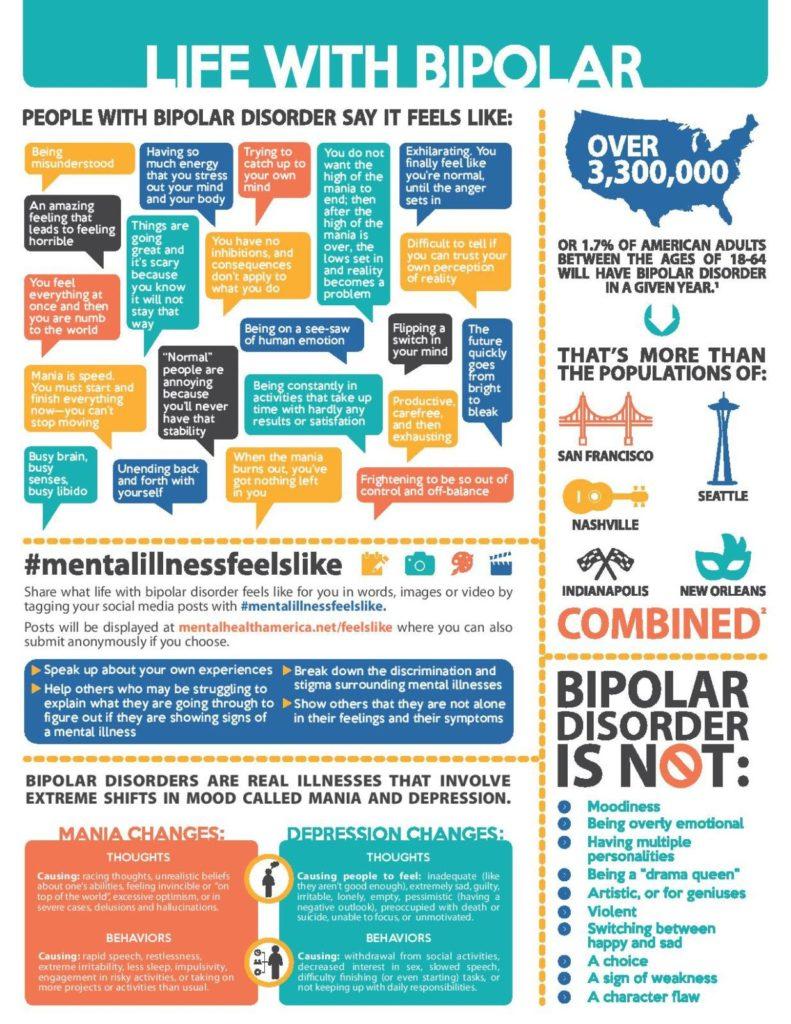 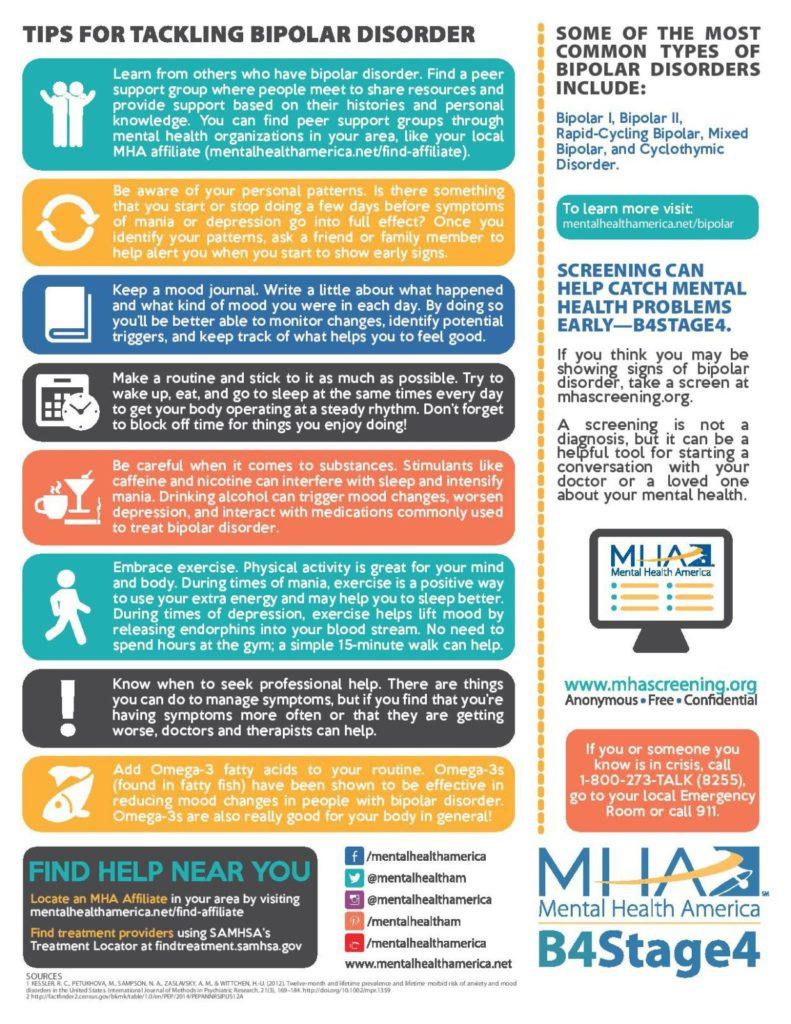 Bipolar disorder can develop at any point in a person’s life. However, most people recognize the onset of this disorder in their late teen years. As the parent of a teen, it is important to know the following five facts about this condition, so you can be educated on the topic, and be ready to support and help your teen should they develop Bipolar Disorder. 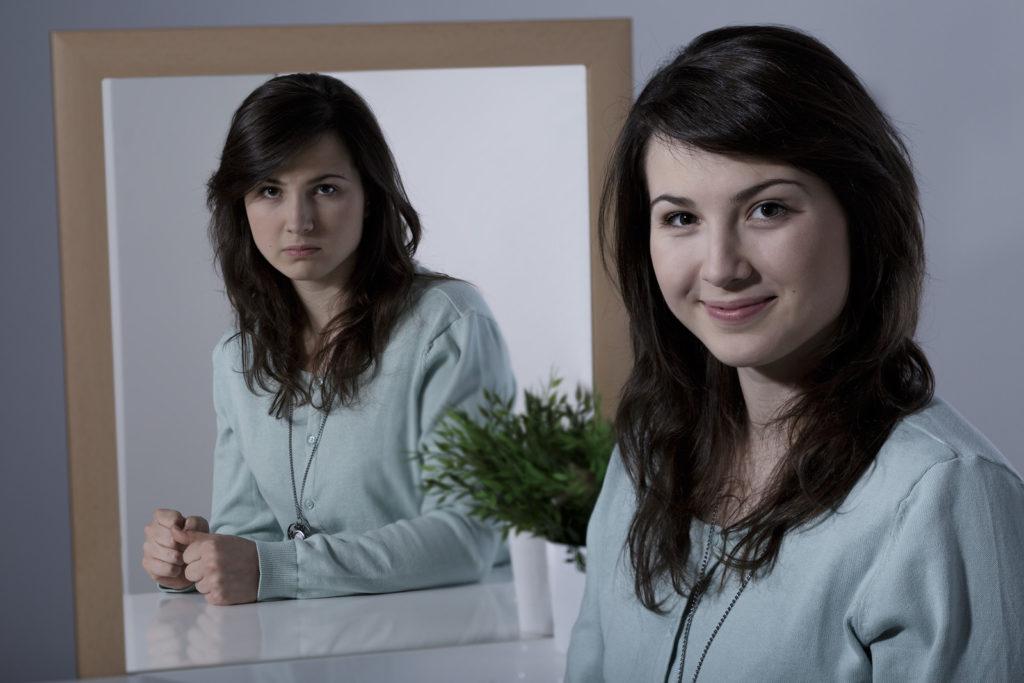 According to the National Institute of Mental Health, Bipolar Disorder is a brain illness that causes very extreme and inconsistent mood swings, causing the person suffering from the disorder to quickly transition between phases of manic and depressive states. These mood swings are not the same as those that teens experience as a normal part of their growth and hormonal development, though. When a teen suffers from Manic Depressive Disorder, their changes in mood will be extremely severe, and often dangerous.

Bipolar Disorder and Depression are very different conditions. Even though Bipolar teens will experience depressive states where they feel deflated and sad, they will also experience very extreme moments of mania that can lead to intense happiness, manic behavior, changes in sleep, and an inability to focus. While Bipolar Disorder can mimic many of the signals of depression, the manic phases and extreme mood changes associated with Bipolar Disorder can help you differentiate the two conditions from one another.

While many Bipolar teens seem to be experiencing great joy and intense happiness during a manic phase, such an extreme mood change can often be just as dangerous as the depressive phase. According to Everyday Health, the manic phase can cause the mind to race, and make it difficult to make good decisions. This results in dangerous activities such as:

According to the International Society for Bipolar Disorders, Bipolar Disorder is the sixth leading cause of disability in the world. This mental illness can affect anyone, at any point in their life. However, most people who develop Bipolar Disorder do so during their late teen, or early adult years. While genetics play a role in determining likelihood of developing Bipolar Disorder, there are other factors such as stress and environment as well.

According to the Depression and Bipolar Support Alliance, more than 5.7 million Americans have Bipolar Disorder. However, with medication, lifestyle changes, family support, and therapy, nine out of ten people with Bipolar Disorder are able to manage their condition, and lead healthy, happy lives.

If you believe that your teenager is suffering from Bipolar Disorder, it is important that you love and support them unconditionally as you help them seek treatment from a medical professional or counselor. While Bipolar Disorder is typically a lifelong mental illness, with strong support and treatment it can be managed, and your teen can live a great life.

The Substance Use Disorder IOP (Intensive Outpatient Program) at Doorways is a group therapy program for teens ages 13-17 who are struggling with drug or alcohol abuse.  The program will take place at our teen counseling clinic in Phoenix, Arizona. IOP may be recommended for those who do not … END_OF_DOCUMENT_TOKEN_TO_BE_REPLACED

Available virtually or in-person at Doorways (limit of 10 in-person to ensure social distancing, please RSVP). Presentation led by Aviya Bensky, LAC. Aviya is the Clinical Lead forone of our DBT Skills IOPs and has experience with family issues, trauma, and adolescents who deal with life through … END_OF_DOCUMENT_TOKEN_TO_BE_REPLACED

This program is designed specifically for adolescents who are struggling with: -Depression/Anxiety-Self-Harm/Suicidal Idealization-Poor emotion regulation-Difficulty establishing/maintaining healthy relationships-Substance use *This Group will be in person only* … END_OF_DOCUMENT_TOKEN_TO_BE_REPLACED

Need a place to talk about drug use? Are you looking for support and ways to have fun without using drugs? We welcome every teen to join us weekly for conversation, education and support regarding drugs of abuse. This is a "no judgment  zone" and a safe environment geared towards real talk with real … END_OF_DOCUMENT_TOKEN_TO_BE_REPLACED

Check out our calendar of events to see what group programs or special events are going on at Doorways.   … END_OF_DOCUMENT_TOKEN_TO_BE_REPLACED