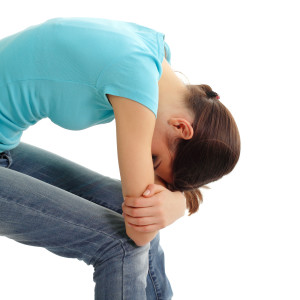 Do you know how eating disorders and anxiety disorders can go hand in hand? (photo credit: BigStockPhoto.com)

When someone suffers from an anxiety disorder, they struggle with excessive, persistent, pervasive worry and fear that is unreasonable to the reality of their situation.  This constant anxiety may center on specific circumstances or activities or it can apply to a broader experience or concern.  There are several different types of anxiety disorders that each manifest differently and can cause different symptoms.  The most common anxiety disorders are:

Obsessive-compulsive disorder (OCD) is characterized by repetitive and persistent thoughts, behaviors, or impulses that are unwanted, involuntary, and often seem nonsensical, even to the person who is doing them.  People with this disorder generally experience obsessive thoughts that drive compulsive behaviors.  These behaviors are often repetitive and are meant to ease the anxiety resulting from the obsessive thought.  They are compulsions which makes it very difficult not to do them, people with this disorder can feel driven to complete the compulsive acts and distress can quickly amplify if they are unable to do so.  Examples of obsessive thoughts and compulsions include:

Post-traumatic stress disorder (PTSD) symptoms come in three different categories.  The first, intrusive memories include things that are commonly associated with PTSD like flashbacks and nightmares.  The second, avoidance and numbing, includes avoiding thinking about, talking about, or doing anything related to the traumatic event. It can also include avoiding previously enjoyable activities, difficulties with memory and concentration, and “checking out” by retreating to a numb state.  The third, hyper-arousal, includes uncharacteristic irritability and anger, self-destructive behavior, problems sleeping, and being easily startled.

The Substance Use Disorder IOP (Intensive Outpatient Program) at Doorways is a group therapy program for teens ages 13-17 who are struggling with drug or alcohol abuse.  The program will take place at our teen counseling clinic in Phoenix, Arizona. IOP may be recommended for those who do not … END_OF_DOCUMENT_TOKEN_TO_BE_REPLACED

February's Parenting workshop is a deeper look into Mindfulness and other skills of Dialectical Behavioral Therapy (DBT). We will explore skills to help you as parents in Emotional Regulation, Distress Tolerance, and Effective Interpersonal Relationships. Come learn what we’re teaching kids at Doorways … END_OF_DOCUMENT_TOKEN_TO_BE_REPLACED

Need a place to talk about drug use? Are you looking for support and ways to have fun without using drugs? We welcome every teen to join us weekly for conversation, education and support regarding drugs of abuse. This is a "no judgment  zone" and a safe environment geared towards real talk with real … END_OF_DOCUMENT_TOKEN_TO_BE_REPLACED